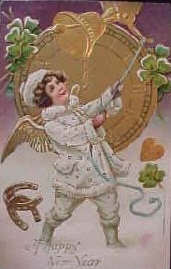 Email ThisBlogThis!Share to TwitterShare to FacebookShare to Pinterest
Labels: Holidays

Those of you researching ancestors in central Pennsylvania might want to take advantage of some marriage record data that has just newly arrived within the World Vital Records online database.

Central Pennsylvania Marriages, 1700-1896 is normally accessed online by paid subscription, but will be available free for the next ten days. The records consist primarily for Union and Snyder counties and contain names of approximately 15,000 brides and grooms.

How wonderful if you could find just one of those couples on your family tree!

Thanks to the Pennsylvania History blog for the update.
Written by Lisa / Smallest Leaf 1 comment:

More of the Irish census online: Counties Antrim, Down & Kerry

I am happy to share that you can now search the National Archives of Ireland website for 1911 census records for counties Down, Kerry and Antrim in addition to Dublin.

Me, personally, I'm looking for Tipperary and Cork in particular. Hopefully we'll see those counties and more online within the new year. Thanks for putting in the effort to get this data online, folks at the National Archives of Ireland!

Thanks to the Irish Family history blog for sharing the news.
Written by Lisa / Smallest Leaf 2 comments:

Today, the day after Christmas, is the feast of St. Stephen whom you may remember as the first martyr, stoned to death shortly after the death of Jesus. According to legend, Stephen was taking refuge in a furze bush to hide from his enemies when a little bird began to sing, betraying him to his pursuers.

The actions of that bothersome little bird have caused the discomfort and often the downfall of many a wren over the centuries in Ireland. Presently in Ireland the bird chosen by the "wren boys" to represent that first bird is not killed, but just caught and fed. For centuries, however, many a wren met its end on St. Stephen's Day. In fact, the custom of sacrificing a wren actually may go back to the ancient Druids, to whom the bird was sacred.

An interesting account of the custom of the "hunting of the wren" was written by Sir James George Frazer in The Golden Bough published in 1922. Frazer's book states:

A writer of the eighteenth century says that in Ireland the wren “is still hunted and killed by the peasants on Christmas Day, and on the following (St. Stephen’s Day) he is carried about, hung by the leg, in the centre of two hoops, crossing each other at right angles, and a procession made in every village, of men, women, and children, singing an Irish catch, importing him to be the king of all birds.” Down to the present time the “hunting of the wren” still takes place in parts of Leinster and Connaught. On Christmas Day or St. Stephen’s Day the boys hunt and kill the wren, fasten it in the middle of a mass of holly and ivy on the top of a broomstick, and on St. Stephen’s Day go about with it from house to house, singing:

“The wren, the wren, the king of all birds,
St. Stephen’s Day was caught in the furze;
Although he is little, his family’s great,
I pray you, good landlady, give us a treat.”

Money or food (bread, butter, eggs, etc.) were given them, upon which they feasted in the evening.

Today the custom is often referred to as the "Feeding of the Wren". According to this Museum of Science & Industry Holidays Around the World webpage, St. Stephen's Day is celebrated in modern times as follows:

...Irish children scour the countryside for a wren, a small bird similar to a sparrow, or they purchase one. The wren is placed in a cage and the children go door to door collecting money for the poor. Young men costumed and in masks go through the villages and towns making loud noises. They carry a holly bush that is on top of a long pole. The holly bush has a wren in it and the young men solicit money for the poor. At the end of the day the wrens are released.

In honor of this Irish tradition and their many residents whose ancestors emigrated from the Emerald Isle, Schuylkill County's Ashland Area Historic Preservation Society focused their annual Old Fashioned Christmas on Ireland, entitling it Going on the Wren.

It looks like the wren won't live down its ancestor's behavior any time in the near future, nor will it have a restful December 26, even on this side of the Atlantic.
Written by Lisa / Smallest Leaf 4 comments:

A candle in the window on Christmas Eve

I shared this last year on Christmas Eve, and just had to repost it again. The Christmas candle in the window is a beautiful Irish tradition that I hope you'll consider incorporating into your celebrations this evening. Merry Christmas from Small-leaved Shamrock!

Christmas Eve is a magical time. The waiting of Advent is over and the celebration of the Savior's birth is about to begin.

One beautiful way that the Irish have traditionally kept this holy night is with the lighting of a candle in the window. The warm light from its glow acts as a welcome to all so that no one should be without shelter.

Offering hospitality to others by way of a lighted candle is a tradition as old as ancient Ireland. In more recent centuries during times of persecution in Ireland, the candle offered a welcome to priests that the home was a safe haven and that Mass could be offered there. On Christmas Eve, the candle also symbolizes the willingness of the household to welcome the Holy Family, so that the Infant Jesus and his family would not again be turned away. One Irish belief held that Joseph, Mary and Jesus still wandered the world, seeking a place of refuge from Herod.

The words of The Kerry Carol, written by Sigerson Clifford, admonish us to be sure to provide a welcome for the Holy Family on this special night before Christmas. Below are verses two and seven. I've placed the full version of the song here.

Don't blow the tall white candle out
But leave it burning bright,
So that they'll know they're welcome here
This holy Christmas night!

Leave the door upon the latch,
And set the fire to keep,
And pray they'll rest with us tonight
When all the world's asleep.

Tim Dennehy, who has recorded The Kerry Carol, has also written a song of his own to be sung in welcome of the Holy Family on Christmas Eve.

Tim has taken a traditional Irish prayer of welcome and added additional verses and a refrain. His song, An Nollaig Theas, begins as follows:

Translated to English, the words are:

You can find the rest of the lyrics to the song on Tim Dennehy's website Sceilig.com.

If you choose to light a candle in your window this Christmas Eve and would like to follow Irish tradition, remember that it requires that the candle be left burning throughout the night. Oh, and it must only be blown out by one having the name of Mary! Or was that the youngest child in the family? Actually it might have been the youngest child who would, of course, be named Mary.

No matter. As long as you get the candle in the window I think any Irishman or woman would be feel welcomed at your home on Christmas Eve, not to mention Mary, Joseph and the Infant Jesus.

A Christmas wish for you and the children in your life 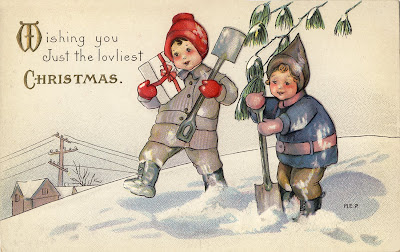 The season of Advent has passed quickly by for me this year, partly because I've been kept busy in the company of some children that I love very much.

Christmas is such an exciting time of year for little ones, and for those of us that are little at heart. Patrick Kavanagh, a Irish poet born in County Monaghan in 1904, put his memories of his sixth Christmas into the form of a poem. I hope you'll enjoy reading about his childhood Christmas memories as you celebrate.

One side of the potato-pits was white with frost—
How wonderful that was, how wonderful!
And when we put our ears to the paling-post
The music that came out was magical.

The light between the ricks of hay and straw
Was a hole in Heaven's gable. An apple tree
With its December-glinting fruit we saw—
O you, Eve, were the world that tempted me

To eat the knowledge that grew in clay
And death the germ within it! Now and then
I can remember something of the gay
Garden that was childhood's. Again

The tracks of cattle to a drinking-place,
A green stone lying sideways in a ditch
Or any common sight the transfigured face
Of a beauty that the world did not touch.

My father played the melodeon
Outside at our gate;
There were stars in the morning east
And they danced to his music.

Across the wild bogs his melodeon called
To Lennons and Callans.
As I pulled on my trousers in a hurry
I knew some strange thing had happened.

Outside the cow-house my mother
Made the music of milking;
The light of her stable-lamp was a star
And the frost of Bethlehem made it twinkle.

A water-hen screeched in the bog,
Mass-going feet
Crunched the wafer-ice on the pot-holes,
Somebody wistfully twisted the bellows wheel.

My child poet picked out the letters
On the grey stone,
In silver the wonder of a Christmas townland,
The winking glitter of a frosty dawn.

Cassiopeia was over
Cassidy's hanging hill,
I looked and three whin* bushes rode across
The horizon — The Three Wise Kings.

An old man passing said:
'Can't he make it talk'—
The melodeon. I hid in the doorway
And tightened the belt of my box-pleated coat.

I nicked six nicks on the door-post
With my penknife's big blade—
There was a little one for cutting tobacco,
And I was six Christmases of age.

My father played the melodeon,
My mother milked the cows,
And I had a prayer like a white rose pinned
On the Virgin Mary's blouse.

"As I light this flame...": the season of Advent 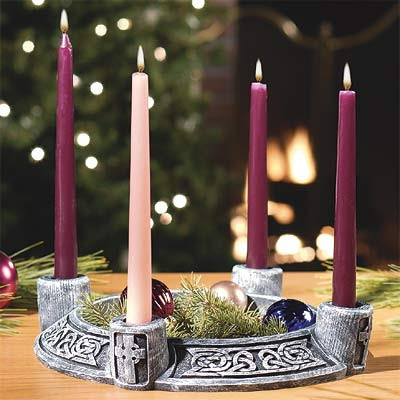 “As I light this flame I lay myself before Thee.”
~ Celtic prayer from the Book of Kells
The time of Advent is an invitation to introspection - a time to look at our hearts and prepare for the celebration of the coming of the Christ Child as so many in previous generations have done for two-thousand years. It is a time of preparation of our souls and of our homes during the coming joyful season of Christmas.

As you prepare for Christmas this year, you might enjoy reading about some of the Irish Christmas traditions that I highlighted last year during Thomas MacEntee's Advent Calendar of Christmas Memories. In the nine articles here at Small-leaved Shamrock and seven articles at A light that shines again, I hope you'll find inspiration during your Christmas preparations in the wonderful traditions of the Irish people as they have historically celebrated this glorious season.

You might also enjoy reading Bridget Haggerty's An Advent Memory and a little lesson on Irish Gaelic for the Advent and Christmas season, both on the Irish Culture & Customs website

Image of the Celtic Advent wreath courtesy of Catholic Supply of St. Louis.
Written by Lisa / Smallest Leaf No comments: