A St. Patrick’s Day miracle for the Irish/Hungarian genealogy blogger

You may be thinking, “It’s a miracle! Finally a new blog article from Lisa!”

Though this very well might be a small miracle, there is a real miracle I’d like to share with you in honor of St. Patrick’s Day. It is a documented phenomenon that occurred over three centuries ago that is still remembered and celebrated today. It is close to my heart for a very special reason, as you’ll see when you read on.

I first posted this article three years ago, but really wanted to share it again this year. Happy St. Patrick’s Day from Smallest Leaf!

As a Catholic and a mother, I often look to Christ’s mother, Mary, for inspiration. She is the perfect example of womanhood. Her life has provided encouragement to women for many generations, including my own and my beloved ancestors’ (on both the Irish and Hungarian/Croatian sides of the family).

In many places throughout the world, Mary is remembered by a special name or title, or honored with a particular statue or painting containing her image. There are countless “names” for Mary. I thought I had heard of most of them.

I was surprised to come across a new title for Mary recently that I absolutely could not believe. As the descendant of Irish and Hungarian ancestors, I was thrilled to discover the Irish Madonna of Hungary. The story behind this title of Mary involves a beautiful painting, two European cities a continent apart, and a documented miracle that is as surprising as it is inspiring.

The village of Clonfert in County Galway, Ireland could not hide from the troubles facing the island during the middle of the 17th century. Oliver Cromwell was imposing his will on the Irish people – often brutally – and many, particularly church leaders, were displaced, persecuted, or killed. Among those was one Irish bishop by the name of Walter Lynch. As history tells us, Bishop Lynch was forced to flee his native Clonfert to Galway city. After the attack and capture of Galway, he was pursued to the island of Inisbofin, and then escaped to mainland Europe. He was in Austria by 1655 – four years after fleeing Clonfert. While in Austria, the good Bishop met the Bishop of Győr, Hungary, who offered him the opportunity to continue his ministry within the Győr diocese until the time when Bishop Lynch could safely return to his homeland.

Sadly, Bishop Lynch, who was making plans to return to Ireland, passed away in Győr in the year 1663, twelve years after leaving Clonfert. During his travels as an exile, the Bishop had carried with him a painting of Mary and the child Jesus (shown below), which he had saved from the Clonfert cathedral. Before his passing, Bishop Lynch had placed the picture in the care of the Bishop of Győr, who put it on display in the Győr cathedral. 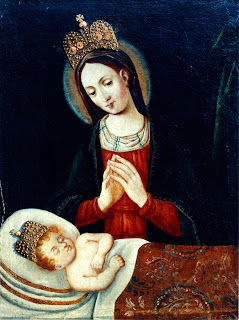 Thirty-four years passed with the painting housed in the Győr cathedral. The Hungarian faithful venerated this beautiful image of the Madonna, and felt sure that Mary’s intercession on their behalf had ensured their recent victories over the Turks. By the year 1697, Hungary was enjoying newfound peace. Unfortunately, that same year, Ireland was beginning to face one of its greatest trials: the outlawing of the Catholic faith, the confiscation of its churches, and the banishment of all Catholic clergy from the British Isles.

As historical accounts tell us, on the feast of St. Patrick on March 17, 1697 a miracle occurred in Győr. According to the account of a priest who witnessed the event, “…the picture of the Blessed Virgin in the cathedral began to weep copiously.” Additional details recorded indicate that this “weeping”, or “bloody sweat”, went on for several hours, and that witnesses of various denominations were unable to attribute the occurrence to any natural cause. Eventually, word of the miracle spread throughout the city. It was witnessed by thousands, many of whom signed a document indicating their presence at the time of the miracle. These included the imperial governor of the city, mayor, councilmen, the Bishop, priests, Protestant ministers, a Jewish rabbi and many more. A linen cloth used to soak up the liquid is still on display today in the cathedral. The inscription on the case reads: “This is the true cloth which was used to dry the blood, which this picture shed in this church on St. Patrick’s Day 1697.”

The beautiful image of the Irish Madonna of Hungary, also referred to as the Consolatrix Afflictorum (Consoler of the Afflicted), remains in the cathedral to this day, framed in silver above the altar. For over three centuries, it has played a special role in drawing together the two nations of Hungary and Ireland. 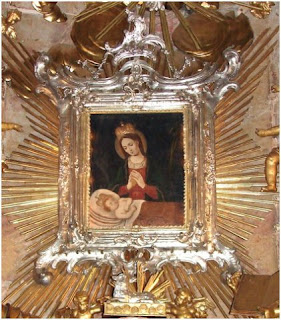 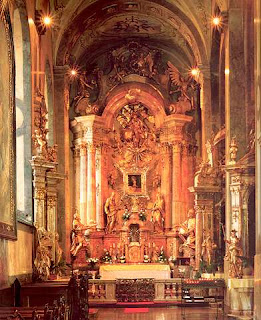 Every March 17 since 1947 (the 250 year anniversary of the miracle), even during the Communist regime, Hungarian priests have made a pilgrimage to the Győr cathedral and visited the Győri Könnyező Szűzanya (Győr Weeping Virgin Mary) or Ír Madonna (Irish Madonna), as they call the painting in the Hungarian language.

Other special celebrations occur regularly for Hungarian lay Catholics to honor Mary’s weeping image in Győr, and there is even an annual Croatian-speaking celebration. Irish Catholics, too, regularly make pilgrimages to the Irish Madonna of Hungary. The year 1997 (the 300-year anniversary of the miracle) saw a special exchange as the Irish Clonfert Bishop John Kirby was presented a copy of the painting by Győr Bishop Lajos Papai on his visit to the city.

As Clonfert’s Bishop John Kirby wrote, “The kindness shown to Bishop Walter Lynch has led to an unusual link between the small Irish rural diocese of Clonfert and the large Hungarian diocese of Győr centered in a big industrial city. It has shown us the value of friendship and the way that the consideration shown to a refugee can deepen the understanding between peoples who might otherwise never have known each other. The history of the painting has an even deeper message. It reminds us of the faith and trust in the intercession of Our Lady that existed both in Ireland and in Hungary 350 years ago.”

Where were my Irish and Hungarian ancestors 350 years ago? I haven’t determined that yet, but it is interesting to imagine the possibilities knowing the history of the time.

As you may know, Catholics like to choose patron saints for themselves. I think it’s pretty obvious that Mary, the Irish Madonna of Hungary, is the ideal patron saint for this Irish/Hungarian genealogist! I hope that Győr’s Weeping Virgin Mary, the Consoler of the Afflicted, will smile down on my efforts to continue the search for ancestors on both sides of my family tree: those from Bishop Lynch’s beloved native Ireland, and those from Hungary, the country that welcomed him with open arms.

If you'd like to read more about the history of the Irish Madonna of Hungary, check out the following websites and books:
Note: This article is cross-posted to my Hungarian genealogy blog, 100 Years in America.  Happy St. Patrick's Day to all!
Written by Lisa / Smallest Leaf 2 comments: