"Don't blow the tall white candle out...": A song for Christmas Eve

Christmas Eve is a magical time. The waiting of Advent is over and the celebration of the Savior's birth is about to begin.

One beautiful way that the Irish have traditionally kept this holy night is with the lighting of a candle in the window. The warm light from its glow acts as a welcome to all so that no one should be without shelter.

Offering hospitality to others by way of a lighted candle is a tradition as old as ancient Ireland. In more recent centuries during times of persecution in Ireland, the candle offered a welcome to priests that the home was a safe haven and that Mass could be offered there. On Christmas Eve, the candle also symbolizes the willingness of the household to welcome the Holy Family, so that the Infant Jesus and his family would not again be turned away. One Irish belief held that Joseph, Mary and Jesus still wandered the world, seeking a place of refuge from Herod.

The words of The Kerry Christmas Carol, written by Sigerson Clifford, admonish us to be sure to provide a welcome for the Holy Family on this special night before Christmas. Below are verses two and seven. I've placed the full version of the song here.

Don't blow the tall white candle out
But leave it burning bright,
So that they'll know they're welcome here
This holy Christmas night!

Leave the door upon the latch,
And set the fire to keep,
And pray they'll rest with us tonight
When all the world's asleep.

Tim Dennehy, who has recorded The Kerry Christmas Carol, has also written a song of his own to be sung in welcome of the Holy Family on Christmas Eve.

Tim has taken a traditional Irish prayer of welcome and added additional verses and a refrain. His song, An Nollaig Theas, begins as follows:

Translated to English, the words are:


You can find the rest of the lyrics to the song on Tim Dennehy's website.

If you choose to light a candle in your window this Christmas Eve and would like to follow Irish tradition, remember that it requires that the candle be left burning throughout the night. Oh, and it must only be blown out by one having the name of Mary! Or was that the youngest child in the family? Actually it might have been the youngest child who would, of course, be named Mary.

No matter. As long as you get the candle in the window I think any Irishman or woman would be feel welcomed at your home on Christmas Eve, not to mention Mary, Joseph and the Infant Jesus.


This article previously appeared here at Small-leaved Shamrock as part of Thomas MacEntee's GeneaBloggers Advent Calendar of Christmas Memories 2008 and 2009. I've republished it this year in celebration of footnoteMaven's Blog Caroling event. Merry Christmas to all!

Image thanks to DoChara.com.
Written by Lisa / Smallest Leaf 5 comments:

One-hundred and twenty years ago today: The death of Ann Cowhey, 1893

It was just five days before Christmas in the year 1893 that Ann Cowhey left this life. Her obituary says she died at home and was in her 90th year. Other records indicate she may have been closer to eighty. If she did as some of her great-granddaughters were known to do, she may have underestimated her age when she had the opportunity.

Ann's obituary also states that she was a "lifelong resident of East Mt. Carbon". I know that to be untrue. She and her husband started their family in New York City. More than likely Ann (whose maiden name I have not yet determined) also immigrated to New York from Ireland, as did her husband Patrick (who came to New York City at age 15).

Patrick and Ann resided in New York City's fifth ward and more than likely attended Old St. Patrick's Catholic Church on Mulberry Street. (The city registry listing their firstborn son's death at age 4 in 1836 indicates that he was buried within St. Patrick's cemetery. Unfortunately, the church could not find any sacramental records for the family.)

After living in New York City, Patrick and Ann arrived in Schuylkill County, Pennsylvania with their two surviving young children. They spent the rest of their lives there and Ann gave birth to six more children (including two sets of twins). Of the four children who survived her, however, only one remained with her in Mount Carbon at the time of her death: her youngest son John.

I was privileged a couple of years ago to have the chance to hold in my hands the family Bible that first belonged to Ann. In this Douay-Rheims translation Catholic Bible published by Edward Dunigan in New York in 1844, she and other family members chronicled the births, marriages and deaths of many Cowhey family members. The year that her husband Patrick (and therefore she) became a naturalized U.S. citizen is also handwritten into the Bible. This book is a true family treasure: a small tangible glimpse into the life of my 3rd great-grandmother.


On this, the 120th anniversary of Ann Cowhey's death, I'd like to share copies and transcriptions of the three newspaper announcements that appeared in the Pottsville Republican Herald at time of Ann's death:

Mrs. Ann Cowhey, a lifelong resident of East Mt. Carbon, died at the residence of her son, John Cowhey, yesterday, in the 90th year of her age. The deceased has been ill for some time, and her old age enfeebled her, so that she was unable to leave the house. She leaves to survive her two sons and a daughter, viz: John, the Pinedale Park hotelkeeper; Thomas, at the Soldiers' home, Dayton, Ohio, and Mrs. Charles McWilliams, of New Haven, Conn. Another son, Engineer William Cowhey, was killed at Connor's Crossing by the explosion of an engine about a year ago.

On Christmas bazaars, ping pong tables and a pleading daughter

If you are reading this because the title intrigued you, you may be surprised to learn that this article is about Christmas ornaments. More specifically, it is about a woman, her dedication to the year-round crafting of such ornaments, and her grown daughter's desire to be the recipient of some of those creations. 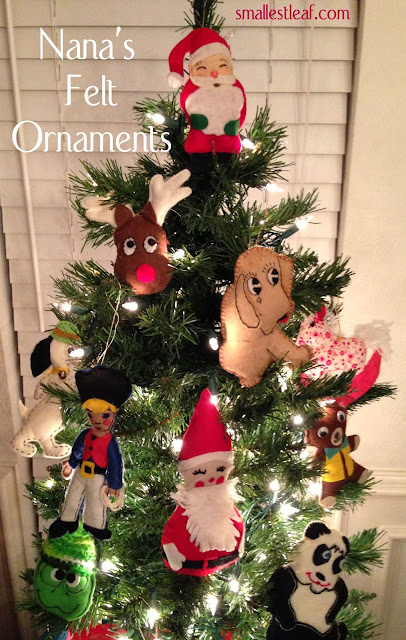 Let me begin by introducing the woman herself (my Nana): Anne (Cowhey) McCue. When our story begins Anne is in her sixties and in ill health. She has raised her children to adulthood, though one still lives at home. She has more time on her hands than she has had for many years. Although she finds some days challenging because of her physical state, Anne has taken on a monumental task for herself: to design, craft, and sell loads of felt Christmas ornaments to raise money for the church bazaar at her parish: St. Rose of Lima Catholic Church in Massapequa (Long Island), New York.


Anne takes regular walks at the local mall, hiding a small sketchbook in her purse. Whenever she sees a character or other design that she thinks would make a good ornament, she takes a few minutes to sketch it, watching over her shoulder for clerks who might not appreciate her "stealing" an idea. She sketches figures of all kinds, including newly popular characters (this is before the age of the internet, so she can't go look Ziggy or the Hobbit up online when she decides to make them into felt ornaments).

Before too much of each year goes by, Anne's brainchild design ideas have been crafted into touchable felt ornaments. Where to store all these treasures while they await the annual parish bazaar? Her solution is her basement: on top of the ping pong tables that take up residence down there. Visiting grandchildren who love to play ping pong get ousted certain months of the year when the ornament population is high. The church bazaar takes precedence!

Speaking of visitors, one visitor and great admirer of Nana's ornaments is her eldest daughter. Whenever she is in town during peek ornament season, she enjoys taking the steps down into the basement to admire her mother's work. Walking around the ping pong tables, she admires the many characters, mentally choosing the ones she'd like for her own Christmas tree. But her wishes are in vain - her mother has dedicated herself to raising money for the church bazaar. Quantity counts, so the ornaments must remain in inventory!

Over the years, Anne's daughter is able to procure a very small collection of her mother's ornaments: sweet little winking mice, teddy bears, Santas, puppy dogs, even a Nativity ornament. Her collection, which is just a small sampling of her mother's work, is a family treasure enjoyed by herself and her children each year as they set up their Christmas tree many states away from Nana and her ornament workshop. 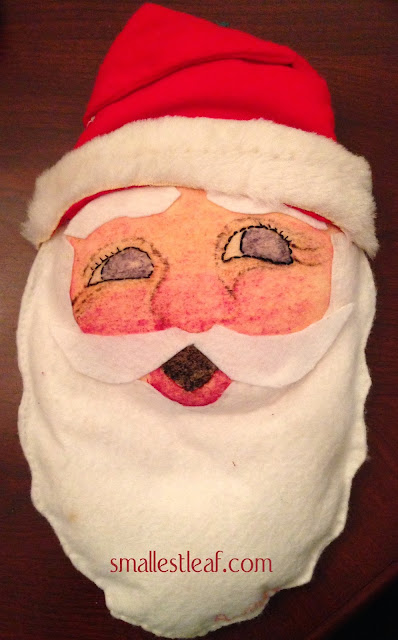 Anne McCue died in 1985 at the age of 71. Yet Nana is still fondly remembered in a special way each year at Christmas in my household and the households of other family members who were lucky enough to receive a few of her ornaments. When I unpack Santa (pictured above) each year, I can't help but think of Nana and wonder whose Christmas trees might also be graced by some of her handiwork and who might have benefitted from the church funds raised because of her valiant effort to fill a basement with Christmas cheer in the form of felt ornaments.

As Nana's eldest grandchild, I had the privilege of getting to know her better than many of my siblings or cousins. (Here I am with Nana and Mommy on my second birthday. Notice me eyeing the cake.) 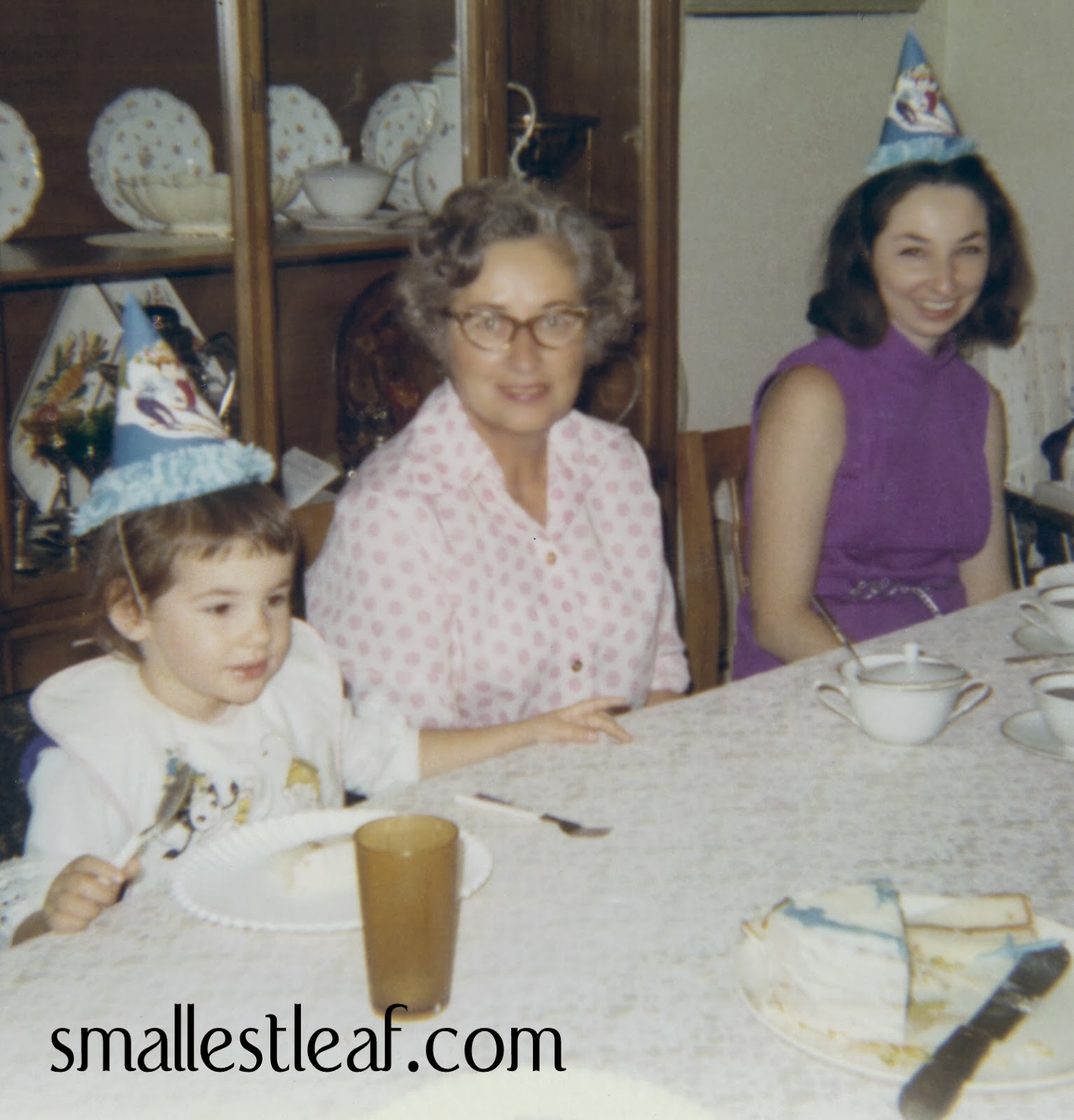 Not only did I have the joy of getting to know Nana, but since I was old enough when she began making her famed Christmas ornaments, she spent some time teaching me how to make them. I made a handful of her designs with her help, and even created a few new ones myself. I still have some of Nana's unfinished ornaments in the box in which I keep my little treasured collection. Maybe someday I'll take up ornament-making again and finish the work she started. But I can't imagine filling up even one ping pong table-full (not without a team of little elves!). 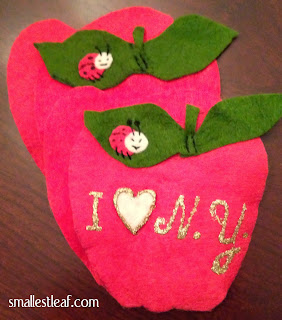 This article is part of a series written in celebration of the Advent and Christmas seasons. It will be included as part of the Advent Calendar of Christmas Memories 2013, Day 9: Christmas Crafts and Day 15: Christmas Tree Decorations. For more Advent and Christmas memories here at Small-leaved Shamrock (going back to 2007), scroll through these articles or stop by my Pinterest page. Visit this preview for more details about the GeneaBloggers Advent Calendar of Christmas Memories and to get some inspiration to get yourself in the holiday spirit!
Written by Lisa / Smallest Leaf No comments: