Death comes in threes: The sorrows of Margaret Foley Cowhey, 1891-1895

Margaret Foley Cowhey was surely no stranger to the trials of motherhood. She and her husband had ten children. Before she gave birth to those children, she had become mother to at least four children from her husband's previous marriage.

Nothing, however, could have prepared this young woman, already such a seasoned mother at age 36, for the sorrows that faced her in three and half years during the early 1890s.

Margaret and her husband William Cowhey faced the loss of their youngest child Lena, age nine months, on October 7, 1891. The Pottsville Republican told the story the next day:


Lena, the infant daughter of William and Margaret Cowhey, of Mt. Carbon, died yesterday. The family have the sympathy of their neighbors at East Mt. Carbon. The interment will take place Friday afternoon at 2 o'clock.


Only a year later, William himself, a train engineer for the Reading Railroad, died tragically in a train engine boiler explosion that made headlines even in the New York Times:
Here is the text of the article:


FIVE KILLED BY AN EXPLOSION.
ENGINE ON THE READING RAILROAD TORN TO PIECES.

POTTSVILLE, Penn., Nov. 14.---On the Philadelphia and Reading Railroad at 2 o'clock this morning, at Conner's Crossing, a short distance north of Schuylkill Haven, the boiler of Mogul Engine No. 563 exploded, killing five men and probably fatally injuring another.

Engine No. 563 was north bound with a heavy train of empty cars. William Cowhey with his crew had brought up a train of empties, and, after running them into the Cressona yards, boarded Engine No. 563 at the Mine Hill Crossing with the intention of reaching their homes in that way, and as is customary took possession of the cab. Dobbins, who escaped instant death, was sitting on the tender.

The men had been on the engine barely two minutes when, without any warning, the terrible explosion occurred. The boiler and firebox were blown off the tracks, and the tracks were so badly damaged that traffic was considerably delayed. The north and south bound midnight Buffalo trains were compelled to run via the Little Schuylkill branch from Tamaqua to Port Clinton.

It is learned that the train had come to a standstill because of the lowness of steam and the blower had been on. It was during this process that the boiler exploded.

Company officials thoroughly examined into the cause of the accident, and this was made plain this afternoon when they loaded up the crown sheet and sent it to Palo Alto. On the crown sheet is unmistakable evidence that the explosion was caused by low water, as the iron is badly burned a deep blue color and the marks show just how high the water was. All railroad men after seeing this acknowledged that there was no other cause.


*
William's untimely death left his 37-year-old wife Margaret a widow and the sole caretaker for eight children, according to Margaret's application for pension as widow of a Civil War veteran. The Record Proof of Births of Surviving Children of Soldier Under Sixteen Years of Age in William Cowhey's pension file (this document can be seen below - click to enlarge) includes the list of Margaret's living children from age fourteen down to eight months along with their birth and Baptism dates. (There were also two older children not covered by the pension.)


The children listed are Mary, Elizabeth, Thomas, Ambrose, Clara, Charles, Blanche and Isabella. The youngest was little Isabella, nicknamed Bella, whose death would bring great sorrow to her mother only two and a half years following William's death.


*
I was shocked when I read the death register listing Bella's death that was sent to me at my request by the Schuylkill County Office of the Register of Wills. According to a handwritten family tree sent to me by a family member, I already had the estimated date of her death. When I read the information by Bella's name on the death register it took me a few moments to make sense of what I was reading.

Young Bella Cowhey had died on April 25, 1895 at the age of three years and two months. Cause of death according to the records: Burned. Duration of illness: Three days.


Not only had Margaret's youngest daughter suffered such a tragic and painful death, but her suffering and that of her family had been drawn out for three days - possibly the longest days of her poor mother's life. Below are copies of the death register. The information about Bella's death is highlighted in yellow and transcribed below. (Click on the image to enlarge it.) 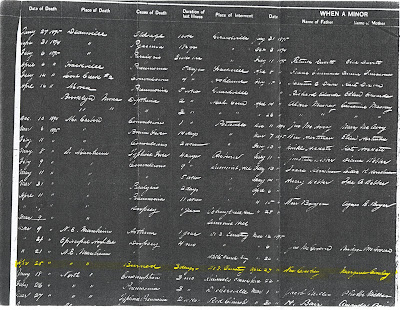 The document does not indicate additional details surrounding her death, besides Bella's place of burial. I can only imagine the circumstances that might have led to it. With so many children to care for and no longer a breadwinner in the family since her husband's death, Margaret must have been stretched incredibly thin as she struggled for the survival of her family.

Was one of her other children "on duty" at the time and tasked with watching young Bella? If so, how they must have been scarred for life as they relived the moment over the years. Regardless of how she was injured, the family suffered much, particularly Margaret, who had so recently grieved for her baby daughter Lena and for her husband William, and was struggling to provide for her family.

As a mother myself, I'm inspired by the story of my great-great-grandmother Margaret's life. Her sufferings help me to be thankful for the often overlooked blessings that each day holds, and inspire me to find strength for my own trials which pale in comparison to those that she suffered a little over one-hundred years ago.

This is so heart-wrenching. I also have one of these tragedy-ridden families - Alice Floyd Ezell Bibb and her husband Thomas Bibb died on the same day in the great influenza epidemic after losing two small daughters and probably a son by a previous marriage; their surviving daughter, raised by an older half-sister, had one son who eventually died in a North Korean prison camp. How did families like these manage to bear so much sorrow?

Thank you for sharing this story, Lisa. I cannot help but think that your research and sharing the story of the life of Margaret Foley Cowhey, brings peace.

thanks for a touching post. Several in my family tree have had children die tragically & one man had 2 sons die in a fire when their caretaker went to get something from a neighbor - they were 3 & 5. Such tragedy shaped the way our ancestors faced the rest of the world. They either crumbled or had a steel backbone.

Margaret Cowhey had so much tragedy in her life. It's very sad to hear such stories, yet we all have them in our tree. It is stories like the remind me of the strength within us all. Women were never the weaker sex, were they?