Mother to 15, Widow at 38: My discovery of the photograph of my quietly heroic great-great-grandmother

Margaret Foley was 21 when in 1878 she married William Cowhey, age 43, at St. Patrick's Catholic Church in Pottsville, Pennsylvania and walked into the world of motherhood. She immediately inherited his five children: Annie, Margaret, William, Joseph and Richard. The children were ages 11 down to 2, and had lost their mother, Catherine (Regan) Cowhey, to consumption the previous year.

Margaret and William went on to have ten children of their own together: Mary, Ellen, Elizabeth, Thomas, Ambrose, Clara, Charles, Blanche, Lena and Isabella. In all, there were fifteen children born to William within a twenty-six year span - a very big family.

Margaret has long been one of my personal heroines. Not only did she become an instant mother of five at a young age, but she also suffered the grief and loss of her husband in a terrible accident, and the loss of several children who died young. By the time she was only 38, she was a widow left with eight children to care for under the age of sixteen. Margaret and William had been married only fourteen years.

It is only fitting that in March - Women's History Month and the month of St. Patrick - I would take the time to honor this brave Irish-American great-great-grandmother of mine. I was pleasantly surprised to realize, also, that today the Catholic Church celebrates the life of St. Matilda, patroness of large families, widows, and the death of children. She is perhaps the best patron saint I can think of for Margaret (Foley) Cowhey.

Five years ago I wrote a draft for a blog post which I never published. It started out:


"No photograph is known to exist of my great-great-grandmother, Margaret (Foley) Cowhey, yet I have an image in my mind of what she might have looked like.  I picture her wearing the black uncomfortable shoes and long skirts of women of her generation.  On her feet for many hours each day, she feels the constant pull of little hands on her skirt - little ones needing attention.  Her hands are worn by the toil of 19th-century women's work..."

I was thrilled just a few days ago when I made a discovery: a photograph of Margaret circa 1901! A cousin had posted a Cowhey family photograph on her Ancestry tree (thanks, Linda!), labeling a few of the family members. When I compared her photograph with one taken thirty-plus years later, I was able to make some conclusions about family members in the 1901 gathering, and have determined with great certainty that Margaret is pictured. I believe Margaret (Foley) Cowhey is the woman seated in the black dress. 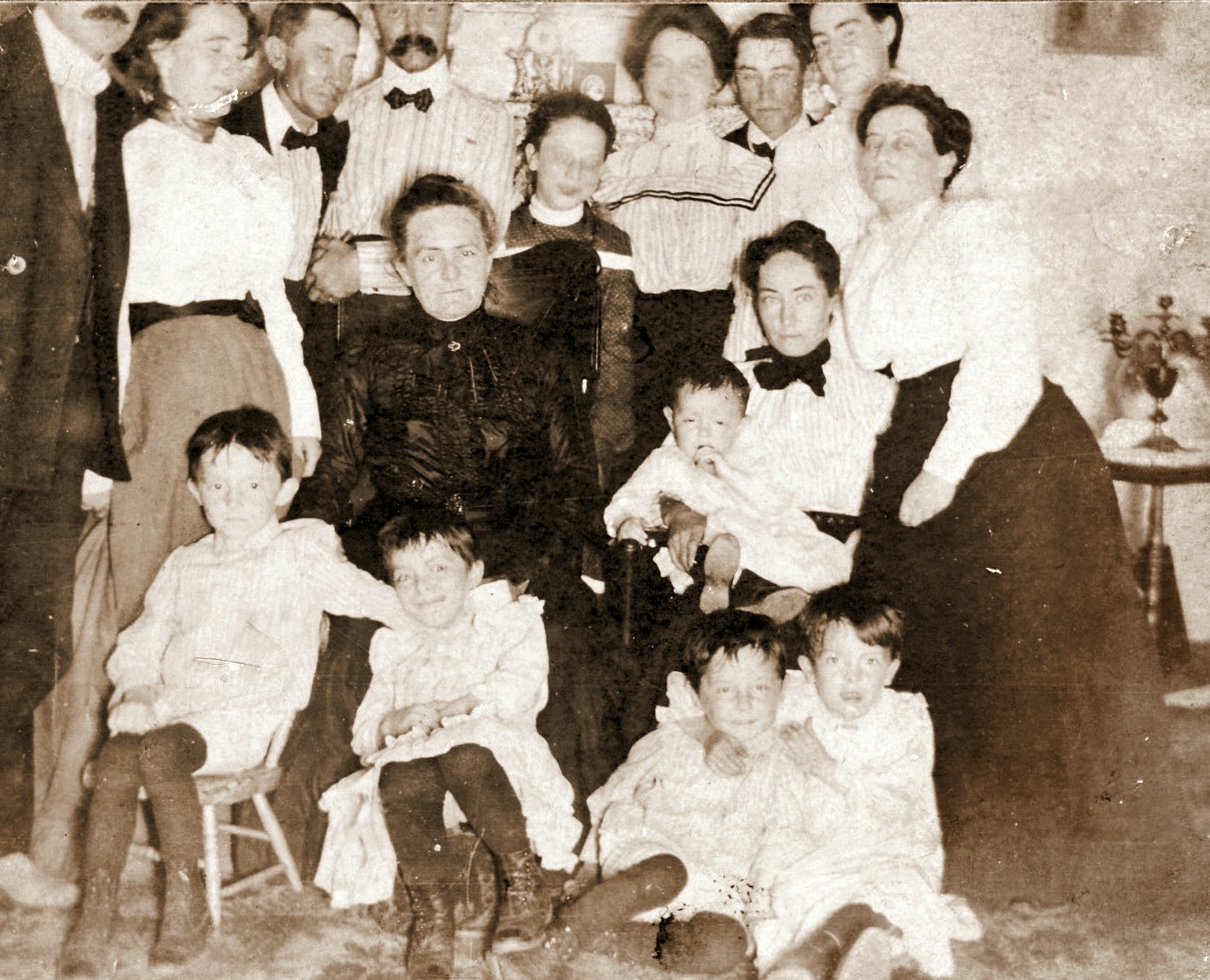 Here she is, widow and matriarch of a huge family (only a small portion of whom are pictured) at the ripe old age of 46. Margaret would live only one more decade, dying of kidney disease at the age of 57. Her obituary reads:

Mrs. Margaret Cowhy, a well-known and highly respected resident of Mt. Carbon, died at her home, at that place, Saturday afternoon after a long illness, death being due to a complication of diseases. Deceased was a former resident of Pt. Carbon, that town being her birthplace. She is survived by three sons, Thomas, Ambrose, and Charles, and four daughters, Mrs. Julius Stockel of Georgetown, Del., Mrs. A. Brown of Phila., and Mrs. Wm. Rodgers of Jersey City, N.J. and Miss Blanche at home. 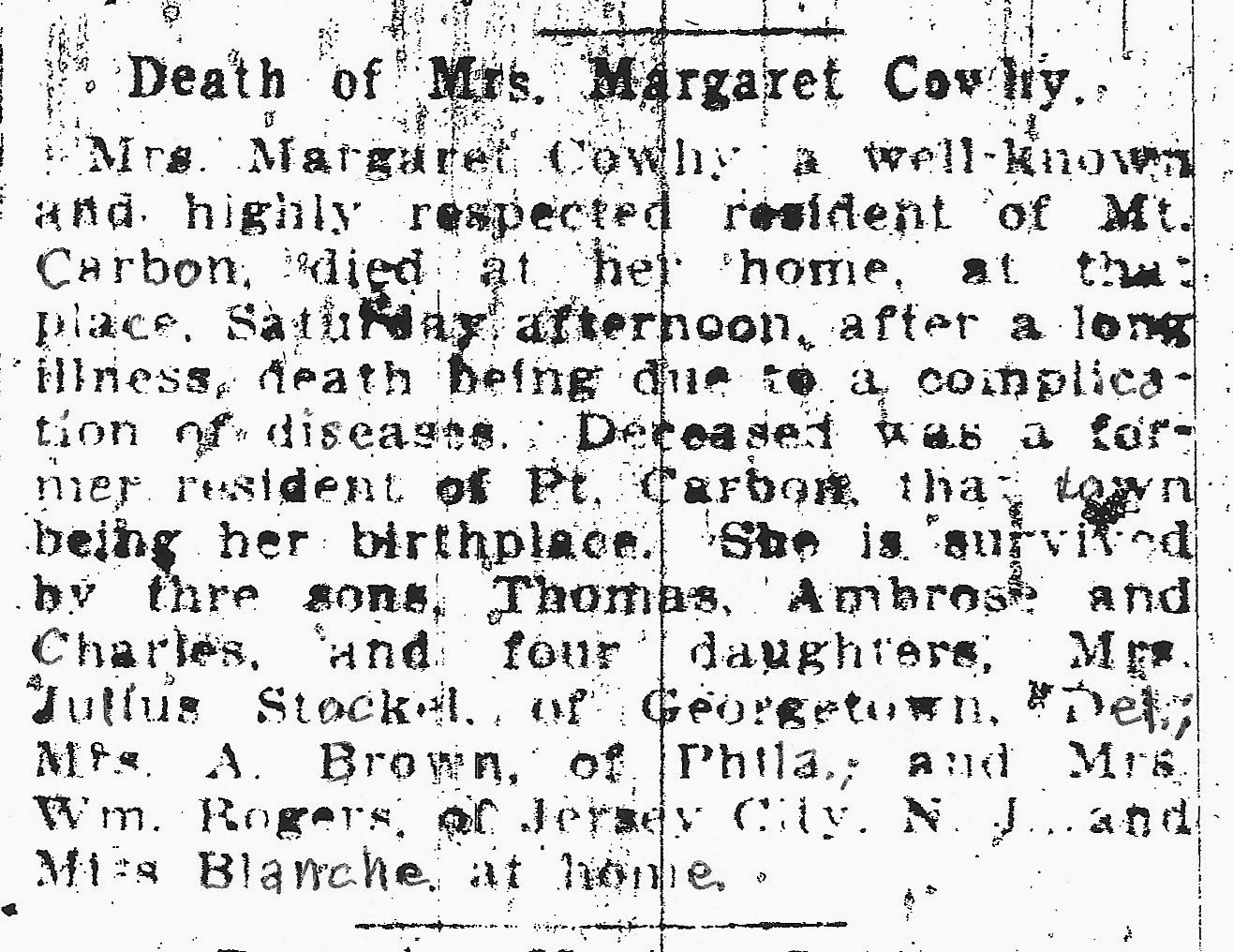 This article is included as part of the 52 Ancestors in 52 Weeks Challenge organized by Amy Johnson Crow. The theme for Week 11, in which this article falls, is "Luck of the Irish". [Note: Hat tip to Donna Pointkouski of What's Past is Prologue for the summary format I've used at the end of this article.]

Our great grandmothers had a hard life and no support system except family.

Lisa, how wonderful to have such an amazing woman in your family tree!

Thanks for your comments, Claudia and Colleen. You are so right about the difficult lives our forebears faced. It is inspiring to look back at the lives of women in previous generations. They had many struggles and much to overcome.

What a wonderful story... & great photo! I can't imagine marrying at that age & being a step-mom to 5 kids. Wow! And, I love the blog post start that you'd never published. :)

Hi Dana! I have SO MANY blog post drafts. I really should rummage through them soon. Glad you enjoyed getting acquainted wiith my great-great-grandmother!