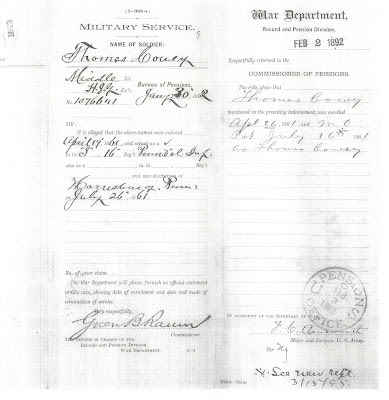 As you know (if you've been reading this blog) William Cowey and his brother Thomas Cowey served as Union volunteers in the Civil War for 3 months in 1861. (See Thomas' clickable military record of service above.)

If William and Thomas were here they would probably correct me. They did not call it the Civil War, instead it was known as The Rebellion. Even as late as William's obituary in 1892, the phrase The Rebellion is used instead of Civil War.

Reading textbook descriptions of the Civil War (or The Rebellion, if you prefer) just can't compare to the experience of my 11-year-old and I at the National Archives in Washington, D.C. a few years ago. After doing a little research I had learned that Thomas Cowey had applied for and received a military pension for his service.

While on our family vacation to Washington, D.C. we took a little detour from the traditional tourist attractions. In between our trips to the Lincoln Memorial and the Washington Monument, and just after standing in line to view the Declaration of Independence in the other section of the National Archives building, my daughter and I walked in and applied for research I.D. cards in order to take a look at Thomas' pension file. 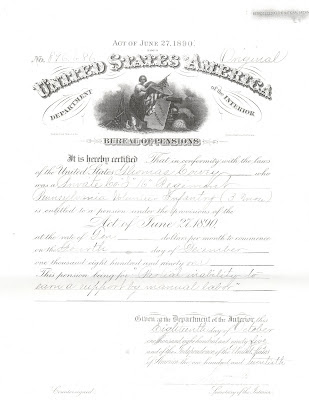 We were able to see the real heart of the archives building. We checked out Thomas' pension application file. (One page of many is shown above. Click on it for a larger view.) We found ourselves transported back in time as we carefully leafed through brittle, yellowing pages - an amazing historical treasure. Here before us, probably hardly touched since they were last filed in the 1890's, were records including descriptions about his health, his occupation, his Civil War service for the Union, and more.

The file indicated that Thomas received $10 a month in pension for "partial inability to earn a support by manual labor". Probably the most unexpected surprise of this experience was the discovery that one of his three predominant medical reasons for applying for military pension was the same trouble that many Cowhey descendants of later generations still suffer from: circulation problems. Yup, he was a relative for sure.

Thomas' file indicated that he was raised in Schuylkill County, Pennsylvania. He never married or had children. His application indicates that he was an iron worker, and was injured on the job one day in Pottsville in December of 1882 (or May 1884 or December 1878, depending on which date indicated in the file is accurate, if any). As a laborer in the coal and iron yards working for the Philadelphia Reading Coal & Iron Company, he had gotten his "foot smashed while at work". A more detailed description is listed on another page of his file:

He was working in a machine shop at Pottsville Pa. called the eading Coal and Iron shops and was engaged in assisting to carry a screen shaft. Then the carrying stick broke and the shaft fell upon his right foot, inflicting the injury for which he claims pension.

Thomas' file also indicated rheumatism and varicose veins as cause for pension, and is careful to explain that "they are not due to vicious habits, but to heavy lifting and straining and being continuously on his feet while working in the yards, which he did continuously for about 10 years."

In 1892 Thomas moved to the National Military Home in Dayton, Ohio. In 1895, at the time of his application for pension, he lived in Ward 6 of the hospital. The soldiers' home was the largest of three such institutions in the country designed for the retirement of men injured during military service. The 627 acres of the Dayton facility (seen above in an image from 1898) is described as follows by Henry Howe in his Historical Collections of Ohio:

It is a unique place; a small city mainly of graybearded men, few women, and no children, excepting those of the families of the officers. It is a spot of great beauty, from its location, its fine buildings, its green-houses, flower beds, and for the display of the triumphs of landscape gardening. These features render it a great place of attraction in summer for visitors, who come by thousands in excursion trains from all parts of Ohio and the adjacent States of Indiana, Michigan, Illinois, etc. The Soldiers' Home (an 1885 aerial view of its gardens and lake is seen above) was ahead of its time, giving the soldiers opportunity for exercise, reading, music, healthcare, and occupational training so that some might be able re-enter society. The Dayton facility, originally called an asylum but changed because of negative connotations, was a beautiful environment designed to improve the health and wellbeing of the veterans under its care. It even had steam heat, indoor plumbing and elevators. Nice place.

A photo of the dining room in 1902 (seen above) had the following description of life at the Dayton facility printed on the back:

Nearly seven thousand men were members of this big family last year, including over one hundred who fought in the Mexican war. Less than three hundred were regulars – almost the whole number were volunteers in the great struggle of the sixties, and almost every state in the union is on record among the places of their original enlistment…

The bill of fare here is simple, wholesome and homey; the establishment includes a farm that furnishes abundance of milk and eggs. Some of the men busy themselves in the tin shop, carpenter-shop and other departments, helping provide necessaries for the running of the Home itself, others lend a hand in the details of the daily housekeeping; still others have infirmities that force them altogether into leisure. There are frequent dramatic entertainments here, and band concerts galore. The men play billiards and pool; cards, chess and checkers have their devotees. Last year the library records show the reading of over forty thousand books, besides larger numbers of papers and magazines. The Home receives in one year over 275, 000 letters and postal cards. The boys in Blue are not being forgotten either by their old friends or by the younger people who have taken their places in the busy ranks of civil life.

Interesting reading about the Dayton Soldiers' Home can be found within this 1891 guide to the facility, this NPS study guide and this genealogy site. 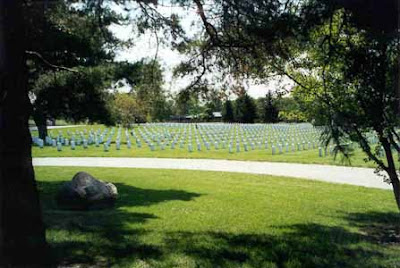 Thomas Cowey died on March 25, 1899 and was buried in the Dayton National Cemetery near the Soldiers' Home. He was interred at plot L, 15, 23, in case you are interested in visiting his grave, if you ever make it to Dayton. Having no descendants of his own, I don't think he gets many visitors or is remembered by many people. My daughter and I will certainly remember him. We know relatively little about him, but had a glimpse into his life and the times in which he lived thanks to our day as researchers at the National Archives. We had touched a bit of history - our country's history and our own family's history.
Written by Lisa / Smallest Leaf