Charles Cowhey had just turned five years old when his father passed away in the train explosion of Engine No. 563 on November 14, 1892. He and his older brothers Ambrose & Thomas, ages 9 & 10 respectively, probably had mixed feelings about trains for awhile, since their father had been killed in such a horrible accident. However, both Charles and Ambrose, and possibly also Thomas, went on to spend much of their working lives in and around the railroad.

The railroad was their world. It's true that coal was king, but coal needed transportation. The railroad provided that. The Schuylkill county canals, which had transported coal by water, had seen their peak in the 1850's and slowly lost significance as the railroad took over. Trains were in their heyday and they were the world of the Cowhey men and their families in the late 19th century and early 20th century. See Images of America: Pottsville by Mark T. Major & L. Ward for great pictures of the time period from the collection of the Historical Society of Schuylkill County.

From various records that I have found, here's an idea of what Charles Cowhey's resume might have looked like:

Here is a Chester to Philadelphia train ticket dated 1942: 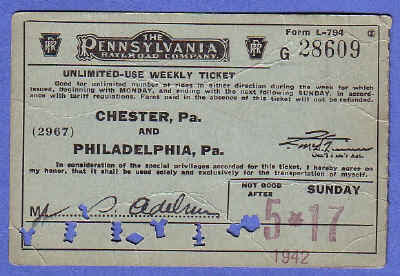 Here is a photo of the old Chester train station: 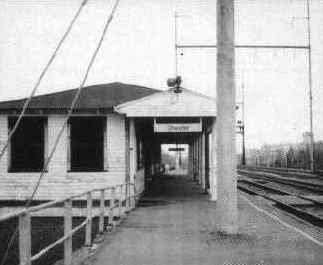 Ambrose also spent alot of time around the trains, certainly as a brakeman (recorded on the 1920 U.S. Census) and also possibly as a "caboose man" (as remembered by his grand-niece, Nancy).

William Cowhey's childhood was spent during what could also be called the childhood of the steam engine. He lived his life in and around the railroad and those engines puffing steam into the air as they carried coal and passengers around Pennsylvania.

His sons also knew the steam engine well. Ironically, in 1957, the year that Charles Cowhey died, was the very year that the Pennsylvania Railroad ended its use of steam locomotives. The steam engine's era was over, and many of the most historic locomotives retired to a life of preservation at the Railroad Museum of Pennsylvania. By 1959 the national rail network had dropped to 220,000 miles. By 1971 the Reading Railroad Company had declared bankruptcy.

The era of the railroad was over. And life would never be the same for the Cowhey family and their descendants.