Cóbh: The last goodbye to Ireland

I am one of 12% of Americans who are reported to have Irish blood in their genes. (I'm sure this number would be higher if more Americans looked a few generations back into their genealogy.) In fact, Irish heritage may come in 2nd only to German heritage in sheer numbers when you look at the genealogy of modern day Americans, according to the U.S. Census Bureau's 2006 American Community Survey.

Considering how much the Irish were tied to their homeland, it is incredible to realize the numbers of people that emigrated, most leaving the green land of Eire never to return again.

Many of them said their last goodbyes to their home country at the port city of Queenstown in County Cork (now called Cóbh, pronounced cove). Queenstown was the predominant emigration port for the Irish. According to the Cóbh Heritage Centre, “From 1848 to 1950 over 6 million adults and children emigrated from Ireland – over 2.5 million departed from Cóbh, making it the single most important port of emigration.”

The website gives a brief summary of the causes of this enormous departure from Ireland:

“This exodus from Ireland was largely as a result of poverty, crop failures, the land system and a lack of opportunity. Irish emigration reached unprecedented proportions during the famine as people fled from hunger and disease… Escape was seen by many as the only chance of survival: between 1845 and 1851 over 1,500,000 people emigrated from Ireland. This was more than had left the country in the previous half century.” 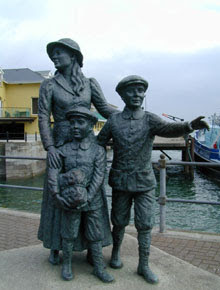 One of the many Irish citizens who left from Queenstown became well-known for her journey, not so much because of who she was or where she came from, but because of where and when she ended her journey. Annie Moore, traveling with her two younger brothers, is now well-known as the first immigrant processed at the newly opened Ellis Island on January 1st, 1892. Her journey is memorialized in statues both at Cóbh's Heritage Centre and at New York’s Ellis Island. To many the statues represent not only the memory of this young lady's emigration from Ireland but the millions of Irish who left their home country and journeyed to America.

Image of the Cóbh waterfront thanks to J. Pollock.

Statue of Annie Moore and her brothers thanks to the Look Around Ireland website.
Written by Lisa / Smallest Leaf

Hello Leesa,
What a truly special place.
I'am one of those who has not yet pinpointed where and when my ancestor left Eire. But, this center is symbolic for all of us.
A must for my eventual first trip over to Ireland.