Come along with us here on a journey at the 3rd edition of the Carnival of Irish Heritage & Culture! We'll be traveling to Irish places - some in Ireland and some outside of Ireland. 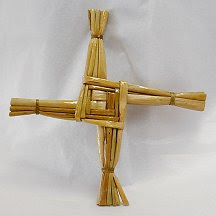 Today, February 1st, is the feast day of St. Brigid, second only to St. Patrick (if at all) in the hearts of the Irish. Brigid was a 5th-century saint well-known for her piety and compassion for others. Among her many titles, including the "Mary of the Gael", is the "Patron Saint of Poets". In the opinion of this poetry lover, that alone is a very good reason to make a warm place in your heart for her. What better day to take a virtual tour to the country she loved and whose people continue to love and honor her?

If you have Irish ancestors, or just love the Irish land and culture, this carnival is for you. So get on your virtual traveling clothes and let's go. 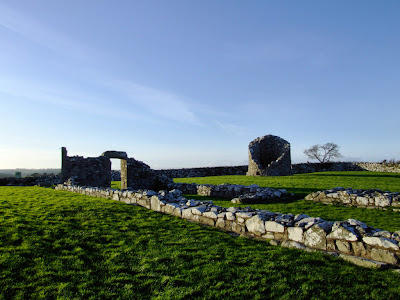 At the start of our journey it might make sense to do a little review of the geography of Ireland itself. Over at A Light That Shines Again I've posted a quiz on Irish counties that might be challenging, but its worth a try for those of us serious about Ireland. Take the quiz which a university professor used with his students at Can you make a passing grade in Irish geography?
Now off to Ireland with Janice Brown of Cow Hampshire. One of the millions of us with Irish heritage who do not live in Ireland, Janice fondly remembers the trip that she and her husband took several years ago. They "left their hearts behind" and took back many special memories on the return trip home. Janice's post provides us with some interesting Irish trivia which she learned on her trip and offers some good links for further reading. Check out A New Hampshirite's Irish Surprise to learn whether or not she actually kissed the famous stone at Blarney Castle.

Janice, myself and many of you reading are part of what is sometimes referred to as the "Irish diaspora" - the descendants of those who emigrated from Ireland. The stories of many of our immigrant ancestors have been lost to history. If only more of us could have the experience of one American man who a few decades ago found a family treasure in his parents' attic. The discovery touched him deeply and he wrote a song about it. To read more about his find and the song which he wrote and named after his family's ancestral village in Ireland, visit A Light That Shines Again for my post Touching letters from a "strong & feisty" old Irishman to his son.

Anyone with a name like Thomas MacEntee is sure to be asked once or twice where in Ireland his family hails from. One such Thomas, known to us through his blog Destination: Austin Family, has trouble answering that question. His post explains his research thus far on his great-grandparents' origins in Ireland. Like many of us, however, the few facts he knows leave him with even more questions. Read Thomas' post entitled Irish Places: Belfast? County Armagh? to get a well-documented idea of his research thus far. (Take note, footnote Maven!)

Jessica Oswalt of Jessica's Genejournal has similar questions about her family's history. Happily, she has found a record linking her great-great-grandparents to the town of Ballymena in County Antrim. Read more of her story and her family's Scotland connection in her post Antrim County, Ireland.

Like Jessica, Miriam Midkiff of AnceStories has an interest in Scotland as well as Ireland. Her Scots-Irish family members spent some time in Letterkenny, County Donegal before moving on to Canada way back in the 1830's. Read more about their travels in Miriam's post Locations of my (Scots) Irish Ancestors.

Many of those who emigrated from Ireland began their sea journey at what was formerly called the port of Queenstown in County Cork (now called Cóbh). I've written about this place where millions took their sad leave of Ireland at my post Cóbh: The last goodbye to Ireland here at Small-leaved Shamrock.

Moving across the Atlantic, we find a lot of Ireland in Massachusetts, where Bill West makes his home. Celtic music at the opening of Patriots' football games, a Red Sox pitcher dancing an Irish jig, the home of the New England Irish Cultural Center, St. Patrick's Day parades, and frequent customers coming into his shop speaking with an Irish accent... Though Bill has never visited Ireland, he experiences a little bit it of it in Massachusetts almost daily. Read more at West in New England's A Bit of Ireland in New England.

For more on the history of Boston's Irish and the not-so-warm welcome that they received when settling there in the 19th-century, read my post entitled "The city where a century ago he came unwanted, he has made his own..." Modern-day Boston would not be the same without its Irish character, but a lot has changed in the past few generations. With the help of several well-researched historians, I take a look at the struggles of the Boston Irish over at A Light That Shines Again.

Barbara Joly decided to take us to a fictitious Irish place with her post about Tara of Gone With the Wind fame. Barbara's post at Our Carroll Family Genealogy describes the plantation's connection to Ireland via its name, which was also the name of the ancient Irish capitol.

Concluding our tour of Irish places, you may be interested in bringing a little bit of old Ireland into your home by learning how to churn your own butter. Terry Thornton's post Making Butter in the Hill Country explains the Irish Gaelic origin of the southern term "clabber" along with a very detailed description of butter-making and everything related to it. Visit Hill Country of Monroe County, Mississippi and write to let us know if your efforts taste like the butter you remember your Irish grandmother making.

Thanks for joining us on this traveling carnival. My hope is that something you've read here will spark your interest in Ireland even further, perhaps encouraging a real trip to Ireland or a place with Irish heritage.

Whether you go traveling or not, plan to take a trip with us on the next Carnival of Irish Heritage & Culture: the 4th edition.

March is Irish heritage month in many places, thanks to the feast day of St. Patrick, beloved saint of Ireland. Our topic for this month will be anything and everything about Irish heritage, genealogy and culture. Posts about St. Patrick will be appreciated, but posts related to any meaningful aspect of Ireland's heritage are welcomed. To borrow an idea from Bill West's genealogy parade, we'll have our very own virtual St. Patrick's Day parade! 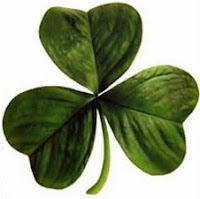 The deadline is March 14, 2008. Submit your parade entry here. Then come join us for the parade on St. Patrick's Day, March 17, 2008. On the feast of St. Patrick, everyone likes to be Irish, at least for one day. Hope to see you at the parade wearing your green!

In the meantime, happy travels...

May the road rise to meet you!

Image of St. Brigid's cross thanks to Irish Indeed!

Image of the ruins of Nendrum Abbey courtesy of Jordan McClements.
Written by Lisa / Smallest Leaf

What a great job! And a wide variety of posts - since I am snowbound in Chicago I have plenty to read this weekend.

Lisa, What an interesting mix of "Off to Ireland" posts you've lined up for us to read. It looks like I'm in for a treat. THANKS.
TERRY

Hi Lisa,
Once again, great carnival! Thank you for putting this together.
All the best to you ;)

Thanks for your kind words, Thomas, Terry and Barbara, and for acting as one of the "tour guides" on this traveling carnival to Irish places. You've each added such different twists on the theme. Hope to see you all at our St. Patrick's Day edition. Submit your parade entry here.