The 1892 Pottsville train explosion: How & why?

After reading about the work of steam engine firemen and engineers, I really enjoyed my recent ride as a passenger on a vintage train and my discussion with its engineer. One thing that I don't want to come close to experiencing, however, is the type of steam engine explosion that took the life of my great-great-grandfather William Cowhey. In fact, just reading about it is difficult enough. The newspaper accounts of the accident show what a sudden and extremely powerful explosion it was. I can't help but wonder about just what would cause an accident of this magnitude.

Now thanks to Ronald Bailey I have an insight into what might have caused that accident on the railroad back in 1892. Ronald Bailey is the President of the Railroad Museum of Pennsylvania Advisory Council, an avid railroad historian, and a licensed steam locomotive engineer. He was able to provide me with an understanding of the technicalities of an explosion such as the one that Engine No. 563 experienced.

Here is his technical explanation of the workings of a pre-1900 steam engine and the possible causes of the type of explosion that killed William Cowhey and the rest of the crew and passengers of Engine No. 563:

A locomotive boiler explosion is usually caused by one of two factors - a defect in the boiler shell or the crew allowing the level of the water in the boiler to drop below the crown sheet of the firebox. In the 19th-century locomotive boilers were commonly made of cast iron rather than steel because steel was far more brittle. Cast iron was stronger than steel and more pliable without tearing. Unfortunately, cast iron could contain unseen inclusions and defects that could cause a failure. As metallurgical techniques improved better types of steel were developed and by the 1890’s almost all locomotive boilers were constructed using steel. Boiler defects were rarely the cause of a boiler explosion in locomotives built after 1900.

A locomotive boiler consists of a cylindrical boiler shell, fabricated of thick cast iron or steel. The boiler shell is thick enough to be able to resist the force of the steam, which, depending upon the locomotive, varied from 125 to 300 pounds per square inch. In 1892 a common boiler pressure was 160 to 180 pounds per square inch, and shell of the boiler was built to safely contain at least twice that pressure.

The added problem, however, is that the fire in a firebox burns at a temperature between 1,800 and 2,600 degrees Fahrenheit. This is hot enough to melt steel. In fact the only thing that keeps the fire from destroying the firebox of a steam locomotive is that the firebox is surrounded on all sides, except the bottom, by water, which absorbs the heat in the process of boiling and making steam.

Boilers were fitted with “try cocks” (three valves stack one on top of the other) that an engineer could use to check the level of the water. Most locomotives were also fitted with water glasses that displayed the water level.

As long as the water in the boiler was kept at a level that completely covered the firebox, everything worked fine. If, however, the water level was allowed to drop below the top of the firebox, which was called the crown sheet, the metal of the crown sheet would be subjected to the intense heat of the fire without any water to absorb the heat. This could cause the metal of the crown sheet to soften and begin to melt. As the metal softened the steam pressure could force the crown sheet to pull out of the thread of the staybolts. Without the support of the boiler shell through the staybolts, the crown sheet would deform and at some point of stress would crack or tear. This would suddenly create an opening that would allow all the steam and boiling water in the boiler to exhaust to the atmosphere. The almost instantaneous expansion of the steam from 150 to 180 pounds per square inch of atmospheric pressure produced a terrific force, which was usually violent enough to rip the firebox sheets and tear the entire locomotive boiler off of the locomotive frames. The effect was pretty much like a rocket taking off and exploding. Boilers were sometimes hurled hundreds of feet away.

Ronald Bailey goes on to extrapolate possible specific causes for the explosion of Engine No. 563 on November 14, 1892:
So what caused low water condition that created the boiler explosion that killed your great-grandfather?
The article from the New York Times says that Engineer Allison had just brought in a heavy train. It is possible that Allison had engaged in a dangerous practice used by some engineers of deliberately allowing the water level to drop to the bottom of the water glass (which was still a couple of inches above the crown sheet) in order to have more space in the boiler to generate steam to supply the engine when it was working hard. It may be that he miscalculated and allowed the crown sheet to become exposed to the fire without a covering of water.
It may also be that the locomotive boiler was foaming without the crew knowing it. The steam that is produced by a locomotive boiler is not recycled but is exhausted up the stack in order to produce a partial vacuum that would draw the hot gasses from the firebox through the boiler flues. Unfortunately, water is never pure, and it contains solids and sediments that are left behind as the water turns to steam. These materials can concentrate over time as more water is added to the boiler and then boiled away. The solids can collect on top of the water forming a film. As the water boils, the steam bubbles are trapped by the film, creating foam that can make it appear that the water level is higher than it really is. If the boiler was foaming, the crew might not have had any warning that the water level was dangerously low.
The article suggests that the steam pressure was low and that they stopped to build up the pressure. When the throttle was closed, the water level dropped, either because Engineer Allison had allowed it to be low or because the water was foaming, exposing the crown sheet, and setting off an explosion.
The article notes that the “blower” had been turned on. The blower on a steam locomotive is a valve that controls a jet of steam that is piped on the side of the steam nozzle directly under the stack. When the locomotive is not moving and there is no exhaust from the cylinders to create a partial vacuum, the blower can be opened to produce an artificial draft, thus drawing oxygen into the fire. The blower had no connection to the boiler exploding.
The following image shows the remains of a locomotive boiler that exploded on the Chesapeake and Ohio Railroad in 1947—a larger and much more modern locomotive than the locomotive from 1892. You can see in the photograph the curved boiler shell, the flat sheets of the firebox, the staybolts that connected the firebox sheets to the boiler shell, and how the steel plates had been ripped apart by the force of the explosion. 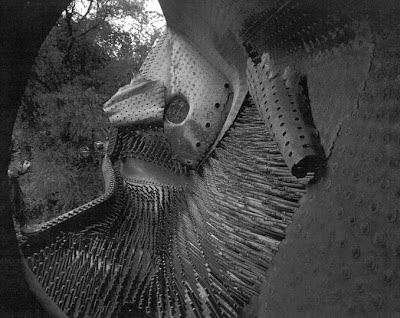 A boiler explosion can be powerful enough to rip through steel plates, half an inch thick or more. An explosion can be so violent and so powerful as to rip a boiler off of a locomotive frame, and literally hurl the wreckage of the boiler through the air like a missile.

In the accompanying photograph, the remains of a locomotive after a boiler explosion are visible. The boiler has been torn from the locomotive frame, thrown through the air, and has landed upside down in a nearby field. The rear of the boiler, with the remains of the firebox, is on the left. The smoke box has been deformed and flattened. Strips of lagging are visible where the sheet metal jacketing has been torn loose. 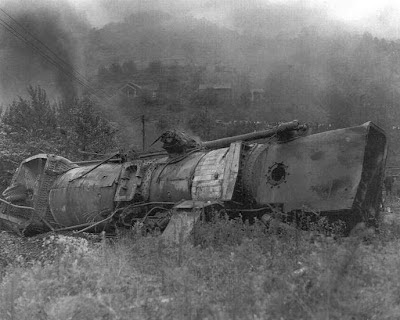 Ronald Bailey currently works a couple of days a month as a steam engineer and fireman. As he states, his "top priority is always to keep the water level up".
After reading his thorough explanation of the ins and outs of steam engine operation and the risk of explosions, I can certainly see why. It may have been an oversight of this type that took the lives of William Cowhey and the other railroaders that night back in 1892.
Written by Lisa / Smallest Leaf