Civil War 150: The Cowhey brothers volunteer for the Union

Only days after President Lincoln's call to arms following the attack on Fort Sumter in April 1861, the men of Schuylkill County, Pennsylvania turned out in droves to offer their assistance.  The Cowhey brothers were among them: 21-year-old Thomas and his older brother William (Great-Great-Grampa to me), just a few days shy of his 27th birthday on April 29th.

In honor of the 150th anniversary of the Civil War, I'll be following along with these two brothers - Thomas, who served only a short three months; and William, who re-enlisted and continued serving in the army throughout the duration of the war.

I hope you'll join me as we remember William's journey as he worked his way through those four trying years defending the Union. Here is one of the documents from his Civil War pension file.  It lists his date of enlistment as a volunteer and the date that he ended his three month period of service prior to re-enlisting.  You can click on the image of the document to view it up close.  I've also transcribed it below for easier reading. 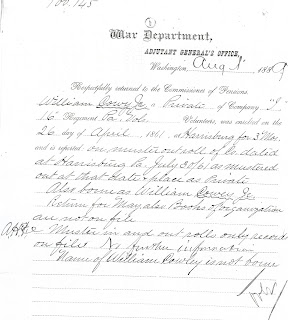 Respectfully returned to the Commissioner of Pensions. William Cowy Jr., a Private of Company “I”, 16th Regiment Pa. Vols. Volunteers, was enlisted on the 26 day of April, 1861, at Harrisburg for 3 Mos. and is reported: on muster out roll of Co. dated at Harrisburg Pa. July 30/61 as mustered out at that date and place as Private. Also borne as William Cowey Jr. Return for May also Books of organization are not on file Muster in and out rolls only records on file No further information. Name of William Cowley is not borne


As I mentioned above, these three months were only the very beginning for William.  His initial volunteer period would just help him to get his feet wet in the army.  Well, actually more than his feet.  If you read Thomas' account of their experience crossing the Potomac River at Williamsport, Maryland, you'll understand what I mean.  (More to come later on that story.)

In the meantime, stay tuned as I follow the path of my great-great-grandfather and his Union comrades 150 years ago.

I followed the links you have in this post and enjoyed it tremendously. Do you know why they joined - adventure, duty, money, land, beliefs. . .??

Thanks for reading and commenting, Margel. I have yet to learn any specifics about my family member's personal motivations, but there are many secondary sources out there providing much information about the devotion to country and call to duty that many men felt at the time. Still holding out hope for a personal family diary to enlighten me even more!