Riding the rails: the life and death of William Cowhey 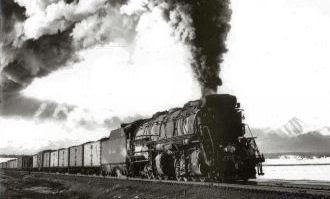 The L-class train pictured here is very similar to the types of trains that my great-great-grandfather William Cowhey spent his life in and around.

William was born on April 29, 1834 in New York. His family arrived in Schuylkill County, Pennsylvania not too long after that: possibly at the same time as the railroad did in 1842, or shortly afterward. This was a time when railroads were new and trains were every boy's dream (that doesn't seem to have changed much).

In 1830 there were only 23 miles of railroad track in the United States. By the year 1840 nearly 3,000 miles of track had been laid.
In 1834, the year William was born, the Philadelphia & Columbia Railroad opened as part of the "Main Line of Public Works". It was a combined inclined plane, rail and canal route stretching 395 miles through the interior of Pennsylvania.
In 1842 the Philadelphia & Reading Railway was opened to transport hard coal from mines in Schuylkill County's southern anthracite field to tidewater Philadelphia. William was 8 years old at the time. Whether his family had arrived in Pennsylvania yet or not, as a young boy at the dawning of the railroad era in the U.S., he must have spent alot of time daydreaming about riding the rails.
1870 is the date of the oldest record I have found to indicate William's employment with the railroads, although my guess is that he was working for them earlier. By 1870 he was already 36 years old and had served his duty in the Civil War on the Union side with a Pottsville regiment.
In 1870, William was a brakeman on the railroad, according to the 1870 U.S. Census. The year before, on May 10, 1869, the nation had celebrated the completion of the first transcontinental railroad. Promontory Summit, Utah was the in the news with the driving of a golden spike. Schuylkill County newspapers would have shared the news with William and his fellow railroad men in Schuylkill County.
By 1880, William was now fireman for the railroad, according to the 1880 U.S. Census. By this time he had lost his first wife, and married his second wife, the young Margaret (Foley) Cowhey. He and Margaret were raising the children from William's previous marriage and now had a new baby of their own, Ellen.
Fourteen years of marriage and ten children later, William went to work one day in November 1892. He had now been promoted to Engineer and was riding home from his duties on locomotive No. 73 on the Reading & Pennsylvania Railroad when tragedy struck. Here is the report of the accident as told by the Pottsville Republican newspaper, Monday, November 14, 1892 edition:

Another Reading Locomotive Blown Up. Five Old Railroaders Killed! Another Fatality Injured - Gathering Up the Mutilated Remains - Sketch of the Victims - A Big Loss Entailed Upon the Company - Details of the Occurence.

It is our sad duty today to chronicle another exposion of a locomotive of the Philadelphia & Reading railroad company, which occurred this morning near Connor's Crossing, about three miles south of this place in which five strong able bodied men were blown into eternity, and one seriously if not fatally scalded.

The ill fated engine was known as one of the L class and was No. 563. The killed are the following:

The ill-fated engine, with a large draught of empty cars and manned by Engineer Allison and Fireman Mackey, were on their way from Port Richmond for Palo Alto, and after arriving near the overhead bridge of the Lehigh and Schuylkill Valley R.R., a short distance this side of Connor's Crossing, the locomotive exploded with the above horrifying results.

THE CAUSE A MYSTERY

It is difficult, yes, impossible, at this time, if it ever can be done, to give the true cause of this very disastrous explosion. Michael Dobbins, the only surviving witness up to noon, lay suffering and unconscious at the residence of his parents at Pinedale or East Mt. Carbon. The attending physician regards his condition so critical that he has placed his patient under chloroform to alleviate his sufferings and has refused any to see him excepting those in attendance upon him.

Persons who were in close proximity, however, say this: the train stood still at the time because the engine had run out of steam. The blower had been put on to accelerate her steaming up and it was during this process that the boiler exploded. Dobbins alighted prior thereto and evidently it was to this cause that he escaped being hurled into the future, as were the rest of his more unfortunate companions.

Cowhey and his fireman, Moyer, had just returned from a trip from Reading, for which place they left about 10 o'clock yesterday morning. They had, shortly prior to the accident, taken their engine, No. 73, and placed it into the round-house at Cressona. After their return trip, and, as was their custom, they went to the office at Schuylkill Haven to board the first engine north bound, so that they could ride to their respective homes, which they, however, never reached alive. Their bodies, with the other victims, now lie cold in death, with the bereaved widows and orphans gathered about their biers, whose only support and heads of families have gone forever. The scene is heartrending.

THE VICTIMS
[I've omitted the details about the other victims]

William Cowhey resided at Mt. Carbon, and was in his 59th year. He was twice married. Four grown up children created by that union survive him. His second wife he leaves a widow, with eight small children ranging from 14 to an infant of but a few months old to mourn his sudden death. The deceased was a soldier on the Union side in the late rebellion, and a prominent member of Gowen Post No. 23, G.A.R. [Grand Army of the Republic]

THE SCENE OF THE EXPLOSION

The explosion occurred immediately under the overhead bridge of the L. & S. V. railroad. The engine 563 was of the L class, which are used to draw freight. Although she was running north the force was so great that she was lifted completely from her frame and turned southward, in the opposite direction. Everything about her has been shivered to pieces and she was, to use a "railroader's" term: "turned completely inside out". The railroad track for a short distance was also torn up. It is truly wonderful when the wrecked condition of the engine is taken into consideration that the bodies of the victims were not more badly mutilated. Excepting Cowhey and Moyer, whose bodies and faces were somewhat battered, the others were not so badly mangled or defaced.

THE CORONER AT THE SCENE

At four o'clock this morning, Deputy Coroner, Dr. H.G. Weist, of Schuylkill Haven, was aroused and immediately summoned a jury. The Coroner B.C. Guigin (?), also appeared as early as possible and they with the jury viewed the scene of the accident. No testimony will be taken for a day or so to await the condition of the injured man, Michael Dobbins.

The steam crane which is used to remove debris and other material in the event of a collision or any other accident on the railroad, was broken a few days ago, and the wreck crew was therefore very much hampered in removing the wreck. The wreckers under Yardmaster Wm. Sebold worked very faithfully notwithstanding their great drawback.

The Reading railroad has been very unfortunate during the past year, with the number of explosions of locomotives which have occurred. One old railroader this morning assigned the following as the prime cause why these engines have exploded. He said in substance the crews are compelled to run their engines at a very high pressure to draw the very heavy trains which are put behind them for the past year. That to keep up the great pressure of steam and the quantity used the fires are forced and the exterior of the boilers are burned out, and something must give way, he added.

Another newspaper account of the accident gives less detail. The Shenandoah Evening Herald Monday, November 14, 1892 edition, has a short description, but with quite a few errors. They appear to have made some corrections and added more details in their Tuesday, November 15, 1892 edition of the newspaper:

The report of the explosion was heard several miles distant, and the shock caused the buildings in the neighborhood to tremble, awakening the occupants and causing much excitement.

The residents of Schuylkill Haven flocked to the scene, and a sad sight met their gaze. Pinioned beneath a mass of broken machinery was Dobbins, and his groans and cries for relief were frightful. The men set to work, and he was soon liberated, placed on an engine, and taken to his home.

WILLIAM COWEY, engineer, of Port Carbon [this residence is an error].

The engine had just finished making a shift and coupled up to a train. The moment the steam was applied the explosion followed.

Cowey was hurled against rocks and every bone in his body was crushed.

Moyer was hurled one hundred yards away into a field.

The others lay near the wreck.

The engine was No. 563 and belonged to the freight trade.

On Sunday she was put on the coal trade and at the time of the accident was on her way to Palo Alto.

The others belonged to the engine which exploded.

The boiler was hurled 75 yards.

Some of the dead were horribly mutilated.

In 1893, less than a year after William Cowhey's death, Congress passed the Railway Appliance and Safety Act. It outlawed the use of link-and-pin couplers and mandated the use of the Janney coupler and the Westinghouse air brake in interstate service, saving hundreds of lives each year. It is not clear from the information that I have found if the new technology would have prevented this particular accident, but it is clear that over time a new focus on safety saved the lives of many railroad men.

For more information about the history of U.S. railroads, see the Railroad Museum of Pennsylvania.
Written by Lisa / Smallest Leaf