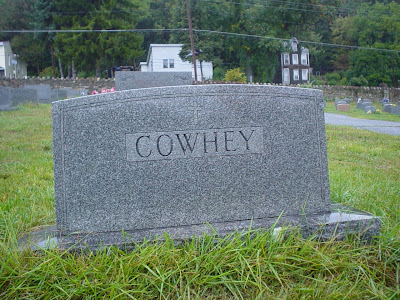 This tombstone at the grave of our beloved family members doesn't tell the story, so I'll share the family legend as I've heard it. Charles & Agnes Cowhey, husband and wife (and my great-grandparents) are buried side-by-side in Mount Carbon, Pennsylvania's Calvary Cemetery. It is a beautiful little cemetery at the top of the hill in Mount Carbon - a place that invites introspection, prayer and maybe even a little racing down the hill (depending on your mood at the end of your visit).

Charles died of heart trouble at the age of 69. Agnes died at the age of 89. Nothing unusual about the story so far. What is interesting is the man buried alongside them: Ambrose P. Cowhey, Charles' brother. A railroad caboose man known for eating cereal with coffee poured over it instead of milk, he never married. He is remembered fondly by a grandniece of his, who enjoyed nature walks with him as a little girl. Not so fond of him was poor Agnes, who, because of his bachelor status and brotherhood to Charles, had to accept him as part of her household for many years.

And now, laid to her eternal rest, who must she and her husband share a gravesite with? That Ambrose again. When she married Charles, did she know she was getting Brose along with him? 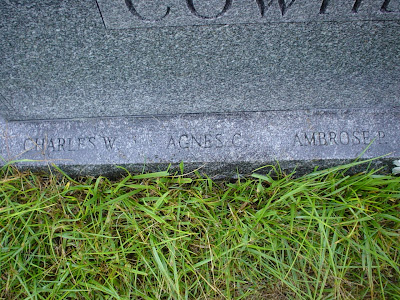